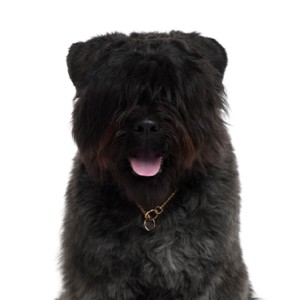 Originally bred as a farm dog, the Bouvier des Flandres performed various tasks like herding cattle, pulling carts and acting as a guard dog when necessary. They are hard workers and was widely known as a very capable farm dog. They also make extremely loyal companions and when they were not working away on farms, they were found cuddling next to their owners’ feet.  Discover more about our Bouvier des Flandres puppies for sale below!

As its name implies, the Bouvier Des Flandres (meaning cow herder) hails from Flandres (European region). The exact ancestral line of the Bouvier is not known. Some believe they might be descendants of the Barbet, early sheepdogs or Dutch griffon.

They were used in the past to help out farmers in a variety of tasks around the farm. These included watching and herding cattle, pulling carts, etc. They were also used as search dogs during the world wars. It came into the US in the 1920s and was recognized and accepted in the same era.

Bouviers are commonly known to be a very intelligent dog breed. They are also very active and can be extremely protective of their territories if threatened; some might even say they can be aggressive. They tend to get very attached to their owners and love being involved in different activities with the family.

Like most dog breeds, when left alone, the Bouvier can get bored very fast and will show their frustration by barking or chewing on shoes and furniture.

Since they are very assertive with a somewhat strong personality, they need an owner who is able to assert dominance through acts of confidence, if not they will want to take up the leadership position.

To ensure they grow up as well-rounded as possible, it is important that Bouviers are socialized as early as possible.

Bouvier des Flandres will survive in an apartment on the condition that they exercised as often as possible. Ideally, they should be in a family home with a large yard that they can run around in as often as they need to.

They can be very inactive when left indoors but tend to become instantly active as soon as they are outside. Owners who work a lot and are never home might not be the best match for Bouviers as this dog breed craves companionship and can be adversely affected by elongated periods of solitude.

Bouviers are very energetic dogs and they love being kept active. Therefore, they do require good exercise every day. These exercises can range from short walks to hikes and runs. It is important to note that bouviers are very intuitive and are always eager to lead the pack.

This is why owners should ensure they take leadership stances when exercising them to assert your position. This could be in an act as simple as letting them walk behind you or giving them orders during the exercise.

The Bouvier des Flandres needs quite a lot of grooming in its lifetime. It is blessed with a weather-resistant double coat which is long and a bit coarse on the outer while its undercoat is denser. They don’t shed a lot but should begin grooming at a very young age so they get used to the entire process.

Their thick coat needs thorough brushing several times every week and should be checked for lice or tick infestation as often as possible. They should be bathed every six or eight weeks and their teeth should be brushed at least twice or thrice weekly to avoid the buildup of tartar.

His ears should be checked very often for foul odour or other signs of an infection and their nails should also be trimmed once a month.

The unregulated breeders who are selling outside of the USDA regulations and without a license are what we consider to be “Puppy Mills.” We are committed to offering Bouvier des Flandres puppies who will grow up to become important members of your family. We only purchase puppies from the very best sources, and we stand behind every puppy we sell.

Bouviers are inherently calm dogs and are very good with kids and the entire family. They make the perfect companion and are protective of their owners.

If exposed to them early enough, Bouviers can be quite receptive towards other dogs or pets. However, they can be very aggressive without proper socialization.

The answer is no. Although they have a thick outer and undercoat, bouviers do not shed excessively.

Yes! They adore kids and enjoy being around them. This is why they make great family dogs.

When wet or damp, Bouviers can give off a quite swampy and somewhat unpleasant smell which tends to linger even after being dried off.

Yes! Bouviers are committed to their territory and will turn into fierce protectors when alarmed.

Bouviers usually have an average of 8 puppies in a litter

Bouviers have a life expectancy of 10-12 years.

Are you interested in purchasing a Bouvier des Flandres?