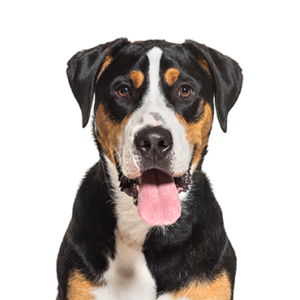 The Greater Swiss Mountain Dog is a large breed of dogs that has its origins in Switzerland. It was one of the most popular breeds in the Swiss alps between the 18th to early 19th century. Today, however, its use has been revolutionized. Despite its size, it is considered a companion or a friendly family dog. Discover more about our Greater Swiss Mountain Dog puppies for sale below!

The Greater Swiss Mountain Dog originated in Switzerland. Several theories have been passed around but there is no certain theory about its exact origin. However, two theories stand out from the rest.

The Greater Swiss Mountain Dog is the oldest and largest of the four Sennenhund Breeds. These include the Appenzell Cattle Dog, Entlebuch Cattle Dog, and the Bernese Mountain Dog. In ancient Switzerland, the average Swiss farmer needed a large dog that could perform several tasks on the farm.

As such, these dogs were used as farm dogs. They were also used by butchers and other laymen who used them as guard dogs. Thus, they earned the name “Butcher’s dog” or “The poor man’s horse”.

Many people believe that the Greater Swiss Mountain Dog nearly went extinct in the late 19th century. This was because several other breeds were doing their jobs. However, they were rediscovered in the early 20th century.

The Greater Swiss Mountain Dog is a very sociable and enthusiastic animal. It relates well with children and humans around them. Although it may be cautious around strangers at first, it quickly warms up to friendly humans.

Despite their large size, Greater Swiss Mountain Dogs are not aggressive. They are considerably gentle. They also require a lot of attention and affection from their owners and do not cope well in isolation.

The Greater Swiss Mountain Dog could be stubborn and determined. As such, it may be difficult and time-consuming to housebreak them. One would need to be firm yet loving with this breed of dogs.

Greater Swiss Mountain Dogs fare better in large apartments because of their size. Their huge and sturdy body frame requires a lot of space to stretch and run around. They are also suited for the outdoors, provided that the weather is cool.

They love to run outdoors when the weather is cool. However, they are prone to overheating and as such, should not be left outdoors for long during hot periods. These dogs do not fare well in kennels either and generally prefer to be indoors.

Thus, families or individuals who want to adopt a Greater Swiss Mountain Dog must ensure that they have a large apartment space.

Just like any other breed, the Greater Swiss Mountain Dog needs daily, regular exercise. This could range from minor exercise routines such as a walk or playing fetch.

These dogs should not be taken on a run because they simply cannot keep up with it. They are more suited for exercises that involve pulling and dragging.

Owners should watch out for signs of exhaustion during exercise routines so as to avoid heat exhaustion.

The Great Swiss Mountain Dog does not require much in the way of grooming. Although it sheds heavily, this can be taken care of by brushing its coat weekly.

They also require regular baths in order to keep their coats shiny and reduce the risk of fleas. In essence, the grooming process for this breed of dogs is quite simple and straightforward.

The unregulated breeders who are selling outside of the USDA regulations and without a license are what we consider to be “Puppy Mills.” We are committed to offering Greater Swiss Mountain Dog puppies who will grow up to become important members of your family. We only purchase puppies from the very best sources, and we stand behind every puppy we sell.

Yes. Despite their large size, these dogs are actually very friendly and farewell with children.

Greater Swiss Mountain Dogs are not aggressive and won’t bite unless they sense animosity. If they show signs of aggression, you can curb the behavior.

Yes, they can. This breed of dogs are very alert and will bark if they notice anything strange or dangerous.

Greater Swiss Mountain Dogs are very friendly and will get along with other pets. However, it is better to raise them alongside other pets in order to reduce the risk of territoriality.

This depends on the age and health status of the dog. It is important to consult your vet.

These dogs are usually prone to bloating. They may also experience bone or joint problems.

They eat mainly dry food of high quality. It is important to feed them on a diet well suited for large dogs.

Greater Swiss Mountain Dogs loves the outdoors but do not cope well when isolated from their family. Thus, it is best to keep them indoors.

Monitor your Greater Swiss Mountain Dog and take it out for walks. Ensure that you take it to the same place every day to defecate. With time, it would get used to it.

You can play fetch or games that involve pulling and dragging.

Are you interested in purchasing a Great Swiss Mountain Dog?