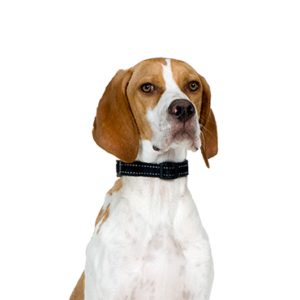 This bi-colored beauty is one of the numerous pointing dogs breeds out there. It is medium-sized and it makes a good playmate when it is not remembering its training roots as a gundog. The pointer is the perfect choice for a family dog if you want your kids to grow up loving a dog, and because of their build and their gracefully long legs, they make a perfect show dog as well. They are huge fans of galloping so they make great sport dogs too. If versatility was an animal, it would be the pointer. Discover more about our Pointer puppies for sale below!

The pointer like some other dogs has a history that is not known. Some people argue that they made their first appearance in England in the 1960s, while some argue that they have been in existence since the 16th century.

According to anatomical research, at least four dogs- Bull terriers, bloodhounds, foxhounds, and greyhounds are instrumental in the creation of the Pointer. Each of these hunting dogs having traits that are found in the pointer, all of which makes the pointer a very good hunting dog.

The pointer has a temperament that is pretty easy to live with. They are not aggressive, they are loyal and they show a lot of affection. They enjoy being around people so they make great family dogs.

Dogs are usually in the mood for a fight whenever there is a cat in their vicinity, but because of the pointer’s non-aggressive nature, it can coexist with both cats and humans in a very peaceful manner.

Despite being a gundog, they are not good guard dogs, much they can do when they notice a suspicious movement around them is bark. They are sometimes clumsy and lazy and might just decide to curl up on the couch or next to their owners. They love children and will fit into a family lifestyle pretty easily. They are also very intelligent and sensitive.

The pointer is hardwired to love the outdoors and might feel uncomfortable and caged in small spaces. Keep the pointer in a place with a large amount of space, just enough for them to be able to gallop around and stretch out their bones and muscles.

Their adaptability to small living apartments is low and they should be allowed to roam more often than not. They are not such good fans of the cold, so try to get them into the house and next to a fireplace when winter hits.

However, they are huge fans of the summer, so be sure to have them out in the shed when the sun is up. The pointer is a hunting dog, so they are bound to bark and chase at whatever looks like prey, so you will have to make sure there is a strong fence surrounding your backyard if that is where you intend to keep them.

The pointer is highly energetic because of its genetics and would need to exercise for at least 30 minutes daily as it is needed to keep their muscles intact. They are runners and mostly gallopers, so they need the extra exercise to help them stay in shape, as they tend to add quite a lot of weight if allowed to turn into a couch potato.

Be careful during exercises, the pointer is a hunting dog, it runs fast and there is a huge chance that it will run away from you. If possible, get a proper identification tag in case they decide to remember their roots and take to the bush, you should be able to find them.

The pointer’s coat is smooth, easy to brush. They are not high maintenance, and grooming is quite easy. They do not do a lot of shedding so you are in the clear. They need to be washed at least twice a week.

The unregulated breeders who are selling outside of the USDA regulations and without a license are what we consider to be “Puppy Mills.” We are committed to offering Pointer puppies who will grow up to become important members of your family. We only purchase puppies from the very best sources, and we stand behind every puppy we sell.

A pointer can live up to 15 years.

Pointers like the outdoors a lot more than they do indoors.

Pointers are very intelligent and obedient, training them is easy

A pointer does not like being left alone for a very long time.

A pointer can grow up to 11inches.

A pointer can weigh up to 45 pounds.

Pointers tend to bark when they see something that looks suspicious.

Pointers are not huge droolers.

The tendency for a pointer to shed is low.

Pointers are prone to running away when they see or smell something that looks like prey.

As long as it does not wander away, the pointers are great companions.