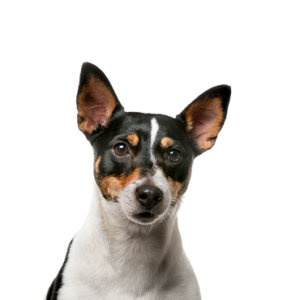 The Rat Terrier is a rare and beloved dog breed in the United States. Due to their active nature and intelligence, Rat Terriers are widely sought after by numerous families in the US. Discover more about our Rat Terrier puppies for sale below!

The Rat Terrier is a breed with origins from the Bull Terrier, Fox Terrier, and English White Terrier. Because of its function as a hunter and farm dog, in the 1910s breeders added new strains to the breed to improve their ability to catch pests.

Later in the 1920s, big Fox Terriers were also introduced to Rat Terrier programs to enable Rat Terriers breed small offspring. It was said that President Roosevelt coined the breeds named after his own Rat Terrier solved the vermin problem in the white house.

Although Rat Terriers were common farm dogs from the 1910s to 1940s, their popularity on the farms lessened when farmers started using pesticides instead. They later became more popular as family dogs.

Rat Terriers are social dogs and this makes them easy to reside with. Due to their eager-to-please nature, they are easily trainable and can learn to take instructions from an early age. Just like it is with most breeds, proper socialization is essential from a young age. Due to their intelligent mind, Rat Terriers love mental exercises. They are also loyal dogs that love attention and praise from owners.

As puppies, they should be trained to get used to staying in crates. This is because, with their curious nature, they can cause some destruction to the home or run into things that may harm them. Though a crate keeps them in check, they shouldn’t be kept in it all day.

Save for night time when they are asleep, they should only be left in a crate a few hours at a time. They are people dogs and should be allowed to be around people frequently.

Rat terriers need about 40 minutes of exercise daily. They require basic physical stimulation such as walking, jogging, fetching, farm work and so on. Playtime can also keep them mentally and physically stimulated. Due to their ability to hunt and do farm work, rat terriers can spend a lot of time running around and playing. They are too active for people who work too many hours and have very little time for their dogs.

Rat Terriers are low maintenance when it comes to grooming. They require brushing once a week and require baths occasionally. Brush their teeth twice a week to prevent dental diseases. Their nails should be trimmed at least once a month to protect yourself from scratches. Also, check and clean their ears weekly to ensure there is no infection.

The unregulated breeders who are selling outside of the USDA regulations and without a license are what we consider to be “Puppy Mills.” We are committed to offering Rat Terrier puppies who will grow up to become important members of your family. We only purchase puppies from the very best sources, and we stand behind every puppy we sell.

Brush them weekly, bath them monthly, brush their teeth once a week and trim their nails once a month. Also, engage them in exercise to keep them mentally and physically fit.

Yes, Rat Terriers shed often. Their shedding is heavier in the fall and spring. They also shed heavily during heat cycles. Weekly brushing can help rid them of excess hair.

Yes. Although Rat Terriers are protective of their families, they are accommodating to visitors.

Rat Terriers are farm dogs with a knack for hunting prey. This makes them fierce diggers. They will try to dig under any fence they can’t jump over so be prepared to check your fences for holes.

At least 40 minutes of exercise daily. This dog breed requires lots of activities and if they don’t get enough exercise, they will become destructive.

Yes. Rat Terriers are very open to living with other dogs. They might chase after other smaller animals though.

Rat Terriers tend to live longer than most dogs. The average lifespan of a Rat Terrier is 16 to 19 years.

The average Rat Terrier stands at about 10-18 inches tall and weighs from 10-25 pounds.

If you want an active, little companion dog, the Rat Terrier is the perfect choice for you!