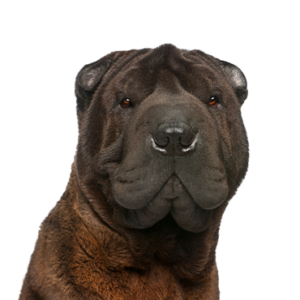 With its stand out Loose, but yet folded skin; ‘hippo-like’ muzzle; small triangular shaped ears and blue tongue, the Chinese Shar-Pei is one of the most ancient dog breeds and even more so unique in its traits. Discover more about our Shar-Pei puppies for sale below!

With its roots emanating from ancient China, historical culture suggests the Shar-Pei be somewhat of a commoner’s dog. With its distinctive rough coat and immaculate hunting intelligence, the Shar-Pei was bred to hunt and fight. Due to its species being endangered by the communist regime, the Shar-Pei was on the verge of extinction until around 1970’s when a breeder from Hong Kong named Matgo Law appealed to the United States to save the Shar-Pei from extinction; hence sustaining the survival of the Shar-Pei.

The Chinese Shar-Pei is considered quite the serene and regal natured dog. Around its owners, the Shar-Pei may not necessarily be the most physically attached or longing for excessive touch, but very much a loyal canine. Originally being a hunting dog, the Shar-Pei is very intelligent and instinctively learning. However, this may not necessarily be a good thing when not trained properly as it’s stubborn tendencies may get the better of it. These dogs can be very territorial and aloof towards strangers.

This loyal canine can be most adaptable when it comes to its environment. Owing to the Shar-Peis innate ability to learn and hunt, an expanse of land may not exactly be the best environment to avoid it going rogue. An apartment with just about enough room would be considered ideal.

The Shar-Pei can be quite active but it is very adaptable to its owner’s patterns. It is necessary to engage the Shar-Pei with exercise daily to avoid obesity. At least a stimulating 30-minute walk every day or other engaging activities such as ‘catch’.

The Chinese Shar-Pei doesn’t necessarily need much grooming. Depending on if it gets much activity outdoors, you will find its nails trim naturally due to all the running. However, if it spends most of its time indoors, once a month, nails should be trimmed preferably using a grinder. A thorough bath should do once a month, and cleaning in and around the folds most especially for pups every week to avoid bacteria getting clogged up in the skin and in the ears. Routine is key at a young age so it wouldn’t be difficult at an older age to groom.

The unregulated breeders who are selling outside of the USDA regulations and without a license are what we consider to be “Puppy Mills.” We are committed to offering Shar-Pei puppies who will grow up to become important members of your family. We only purchase puppies from the very best sources, and we stand behind every puppy we sell.

The Shar-Pei is a very independent dog and can very often be aloof around strangers showing aggressive behavior towards other animals and humans. However, with early socialization would curb this excess. Shar-Peis are also very loyal to their owners and are quite protective of them.

The Shar-Pei can live up to 8-12 years. Considering the numerous complications and health challenges the Shar-Pei may face in the course of life it’s life, about 80% of these dogs only make it to 10years old.

Due to the nature of the rough coat, the Shar-Pei does not shed as frequently as other fine coated dog breeds, however during the fall and spring, these canines shed more frequently. Regular grooming should be enough to keep it looking as neat as possible.

English bulldog’s shed more frequently during the cold seasons like winter and spring. Compared to other dogs these cute dogs shed rather moderately and even lesser as they age.

This breed of dog is known for its stubborn nature and can be very difficult if adequate training is neglected at an early stage. It is important to teach the Shar-Pei routines early on such as nail trimming once a week, bathing every month, going for a walk by 1 pm and so on. Shar-Pei also responds well to reinforcement.

The Shar-Pei has a natural instinct to protect its territory very loyal to its family, the Shar-Pei will respond to threat and serves as an excellent guard dog.

Shar-Peis are quite expensive. These rugged back canines, however, are not as expensive to maintain. Contact us today to learn more about the availability and cost of these puppies.

Shar-Peis can be quite independent and can easily adapt to its pet parents’ lifestyle. However, at least half an hour a day of exercise should keep this canine fit and healthy

Shar-Pei has been commonly reported to smell offensive. Due to various factors including its coat, this breed should be brushed weekly to remove unwanted debris and bathed once a month thoroughly.

The Chinese Shar-Pei when not socialized at a young age can be all of and hostile to other pets and humans. Owing to its territorial nature and the breed’s past as a fighting dog, Shar-Peis can be dangerous towards other dogs.

This depends solely on the owner as both genders have their specific pros and cons.

This wonderful breed has been widely admired for its unique physical features as well as its loyalty and protectiveness. Certainly, the Shar-Pei is one of the most fascinating dog breeds around today.