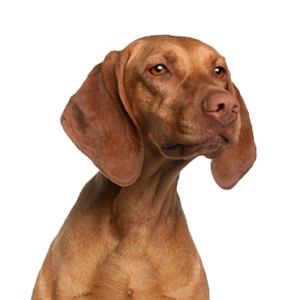 At first glance, the Vizsla feels like a dog bursting with potential. There’s something about the eyes that seems to hold you spellbound. Sometimes it feels like you’re caught up in a Twilight Saga. The Vizsla is a Hungarian red-coated gun dog breed, an elegant athlete, versatile and can stay out in the field for days. If you’re looking for a dog that can withstand the pressures of long-haul runs in the field, then the Vizsla is the right companion for your adventure. The Vizsla is a loyal sporting dog and companion that hunts fowls and upland game. It is also a family dog. Its’ exceptional sense of smell makes it an exceptional hunter with exceeding abilities. Discover more about our Vizsla puppies for sale below!

The earliest records of the Vizsla dog breed dates back to the 14th century. In 1357, an illustration was done on the Vienna Chronicle and it was ordered by King Louis I of Hungary. Early warlords loved the loyalty and companionship of the Vizsla, so much so they preserved the bloodline for centuries.

The Vizsla is a tough breed that has survived the Turkish occupation of Hungary in the 16th and 17th century, the Hungarian Revolution in the 19th century, World War I and World War II in the 20th century. The Vizslas are a tough breed that has survived near extinction events, research work carried out has shown that the pure bloodline of Vizsla still exists in the modern-day.

The Vizsla is an affectionate, gentle and energetic dog breed. They are very loyal to their masters, caring and they bond very well with children and strangers. Vizslas are not one to hide their feelings, they show their frustrations by whining or crying out for you to notice that displeasure. They are exceptional at guarding their territory and will bark at perceived intruders invading their private space. They are excellent swimmers, great retrievers, great pointers and exceptional hunters. They can assimilate training.

The vizsla is a highly active dog that loves to indulge in physical activity. It’s a natural-born Hunter, so while living with a family, it requires a huge yard space to roam. Cramping is not the style of a Vizsla as this will give the dog a bit of downtime. You don’t want to have a crampy Vizsla whining in the house, the sound can make you go “coo-coo.”

The Vizsla is great with kids and love that extra physical push kids normally give dogs. They are intolerant with cold weather and moderately tolerant with hot weather. An average weather condition makes them function optimally to their full capacity.

The Vizsla needs roughly between 30 minutes to 1 hour of exercise. Swimming is a great exercise routine as well as playtime. The leash must be taken off to give the dog a real “playtime” experience. This boosts the dog’s charisma, also, when playtime is done with kids, the dog’s social skills will improve astronomically.

The dog’s hair type is short and coarse. This allows for easy combing and reduced grooming complexity. Mild shampoo or soap and a brush with stiff bristles are recommended during baths.

The unregulated breeders who are selling outside of the USDA regulations and without a license are what we consider to be “Puppy Mills.” We are committed to offering Vizsla puppies who will grow up to become important members of your family. We only purchase puppies from the very best sources, and we stand behind every puppy we sell.

Separation anxiety creeps in when a Vizsla is left alone, so they’re more active when they’re around the family. They’re friendly, lively, happy and they are great pets for the family.

A Vizsla is a very loyal dog, this characteristic trait makes it a dog that will defend its owner to death.

Their pups are moderately expensive. Contact us today to learn more about the availability and cost of Vizsla puppies.

Their short hair coat is so unique that they make the Vizsla give off little or no smell.

The Vizsla is an affectionate dog that constantly craves your attention. This attribute makes them clingy and cuddly with their owners.

A Vizsla essentially lives from 10 to 15 years.

When properly trained and socialized, Vizslas don’t bark a lot. They only bark when it is necessary and feel threatened by strangers or intruders.

Leaving a Vizsla at home alone can be counterproductive or destructive. Out of frustration, they can become irritably unbearable.

Vizslas possess webbed feet and this makes them exceptional swimmers. However, they lack insulating undercoats like other breeds and shouldn’t be allowed to swim for long periods in cold water.

Their hair coat is very small so shedding will generally go unnoticed; however, Vizslas shed a great deal.

The Vizsla is an affectionate companion that loves the home front. They get irritated and destructive when they’re left alone for long periods. Regular exercise is a must for this dog and socialization is required to prevent them from being aggressive with other dog breeds of the same sex.